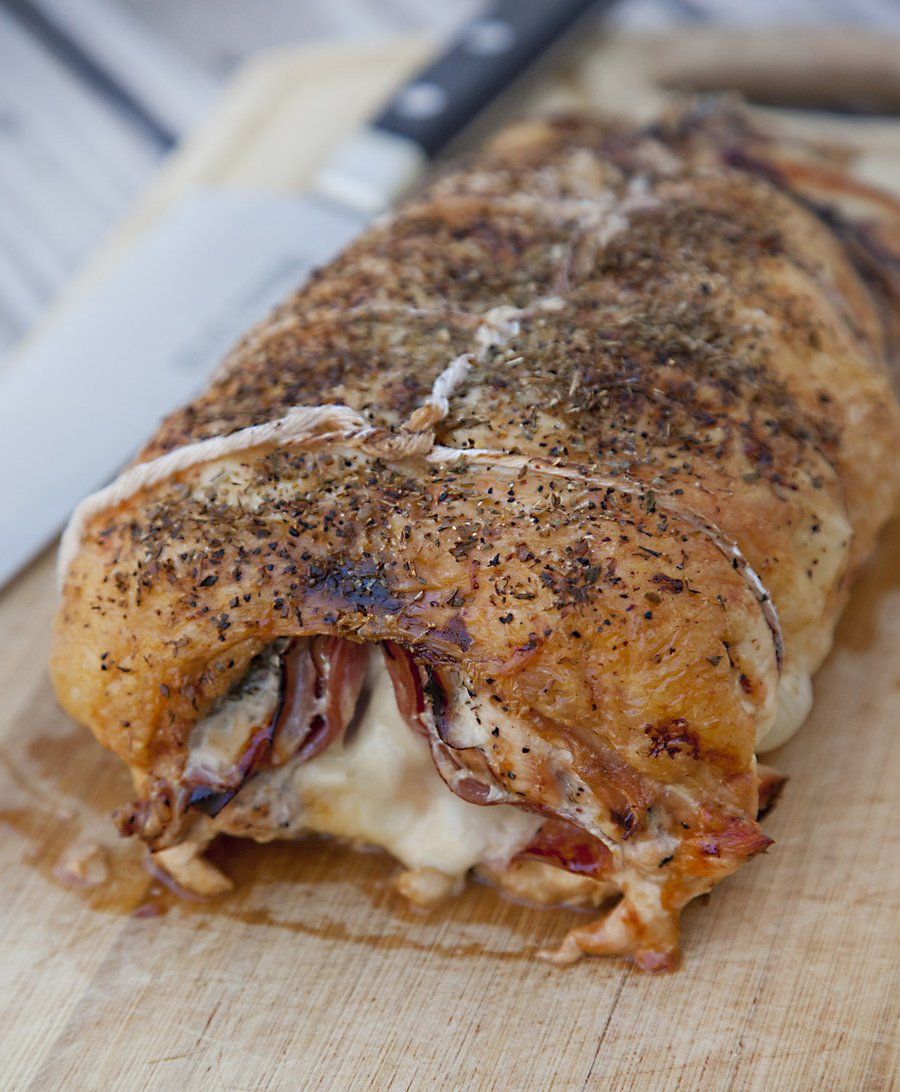 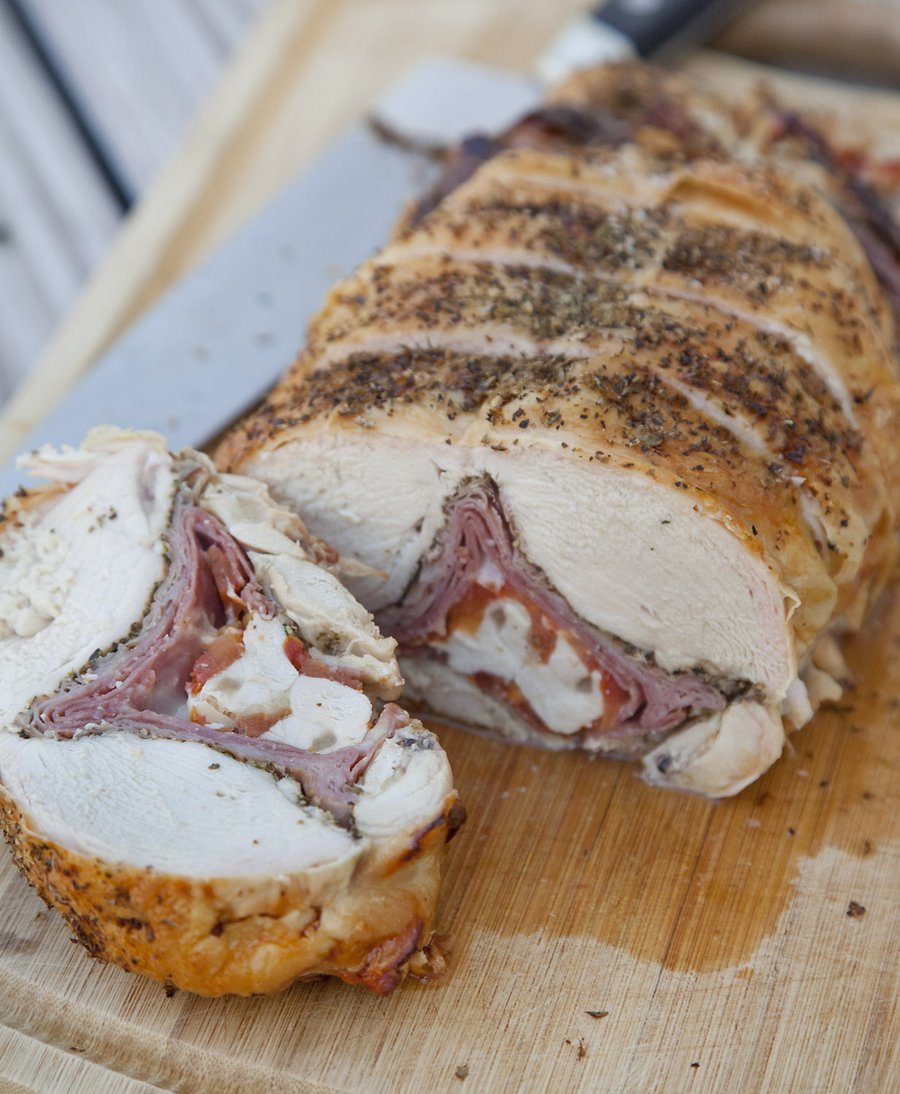 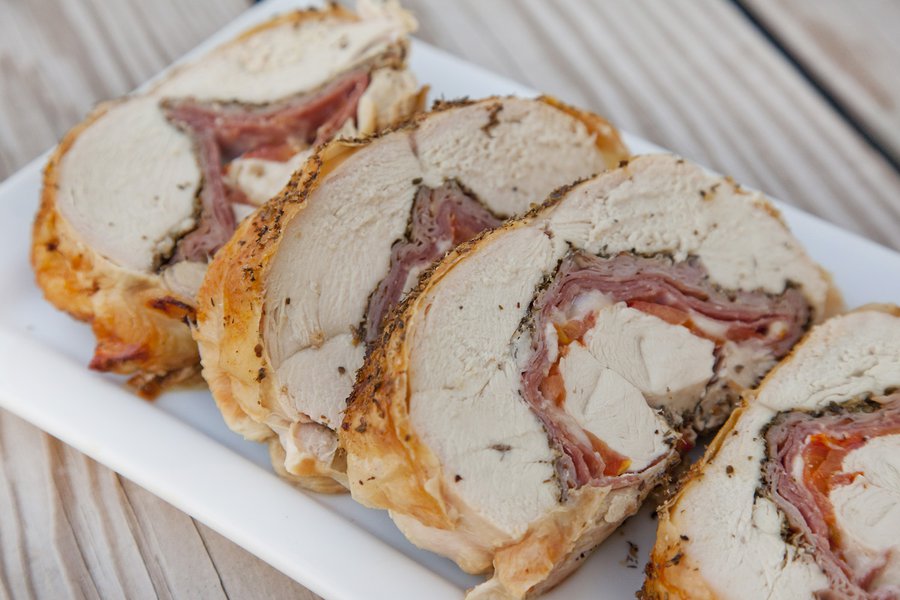 The other night I was talking to my dad on the phone, and inevitably, at some point in our daily conversations food comes up. My dad is a true foodie – he’ll try anything and as a chef, he is the best person to cook for because he enjoys food and has a very broad palate…so asking him what I should cook and feature on the blog is a no brainer. He started talking about a dish my mom used to make, Braciole – which is basically a pinwheel of flattened meat that is stuffed with various ingredients, rolled, seared and then typically braised until cooked. For some reason, the mention of Braciole made me think of a stuffed Chicken, which then made me think of a Ballantine. A Ballantine is a deboned whole chicken, which is then stuffed and typically baked.

I have made a Ballantine before (click here for the recipe), stuffing it with my mom’s stuffing and it was fantastic, so I decided I would take the efforts to debone a whole chicken and stuff it with something new.

This is where we’re getting into the Balzone portion of this post. I am sure you read this post and said WTF is a Balzone…..well it’s my conceived combination of a Ballantine and a Calzone….a Balzone. Genius, I know. I debated with the name Calantine but Balzone to me sounded like a character in The Sopranos and that was all I needed to finalize the term.

I came up with the idea of making this a calzone type filling because I am currently pregnant, and you’re not supposed to eat any kind of deli meat while pregnant because of the fear it may contain Listeria… and therefore, I have been utterly deprived of things like Ham, Salame, Prosciutto, and the like for 7.5 months. However, the loophole to this pregnancy dilemma is that if you cook the deli meat through (like you would a calzone), any potential listeria the meat may contain is killed through the cooking process and you can ingest is with gusto. SO to satisfy my need for salty deli meat, I decided to make this Ballantine into a Calzone/Balzone – I also realized, unintentionally, this is a super Keto dish, basically subbing out the bread and using the chicken, so for my Keto Guidos out there, you’re welcome.

Now back to the process of making the Balzone – the most time consuming part is deboning a whole chicken, which my man, Chef Jaques Pepin demonstrates like a magician here – I watch this video every time I debone a chicken because it ensures I do it right and it also keeps me incredibly humble because Chef Pepin is an artist.

I chose to stuff this chicken with Honey Ham, Genoa Salame, Provolone, Tomatoes and various dried herbs. You can also try combos with Prosciutto, Pepperoni, Roasted Red Bell Peppers, Mozzarella, fresh Basil, and the like. You can also choose to served the finished sliced Balzone on bread like a sandwich, or just eat it on it’s own!

I also tried it out with some of my Basil Pesto on the side, which was an awesome combo!

Since I think the vehicle of a deboned chicken is the coolest thing ever, I intend to try some more stuffed Ballantine ideas:

Stay Tuned and Enjoy my BALZONE! 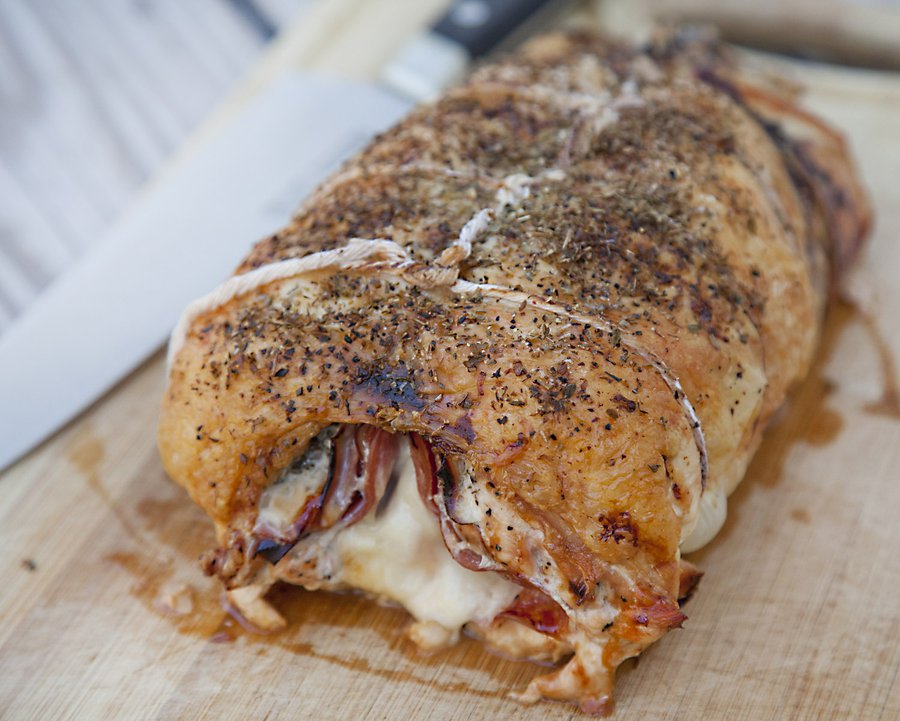 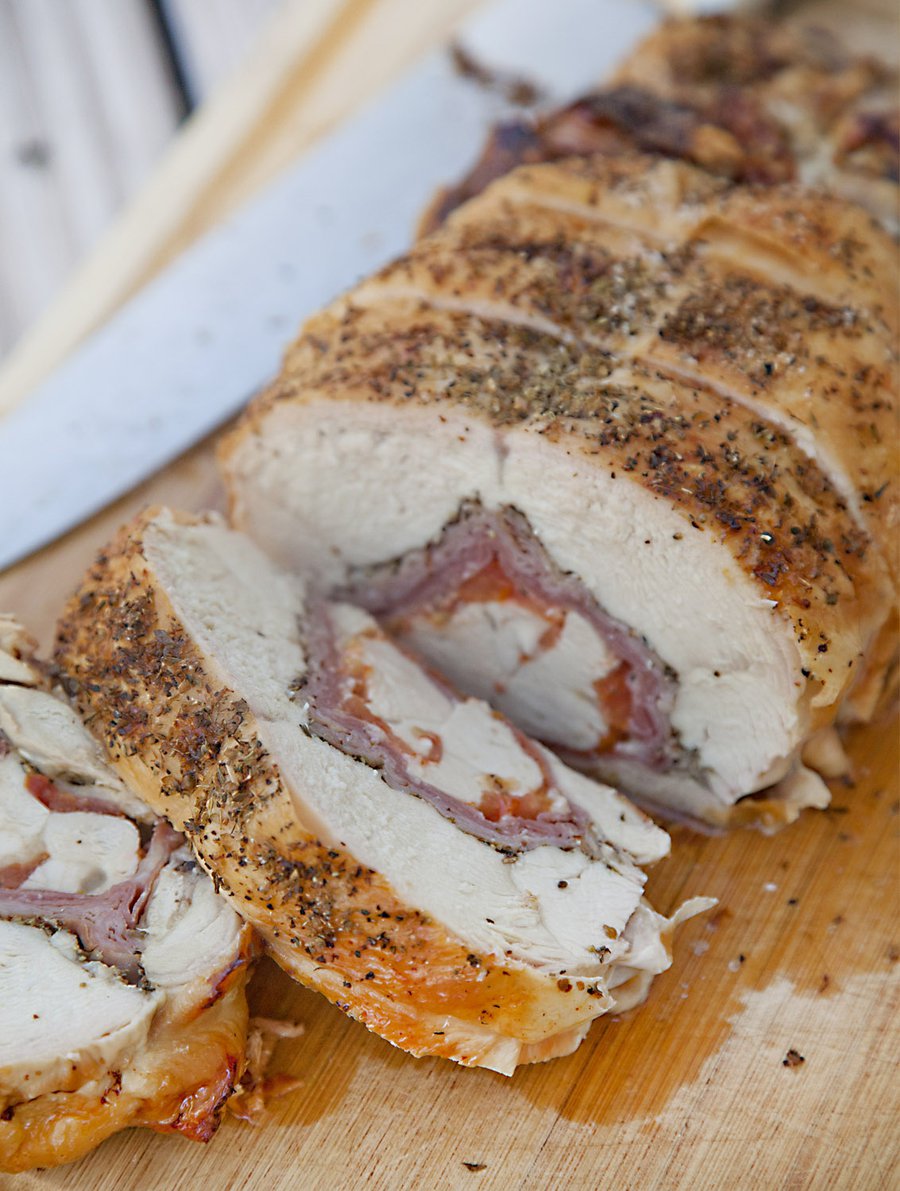 A whole Chicken deboned and stuffed with Ham, Salame, Provolone and Tomato 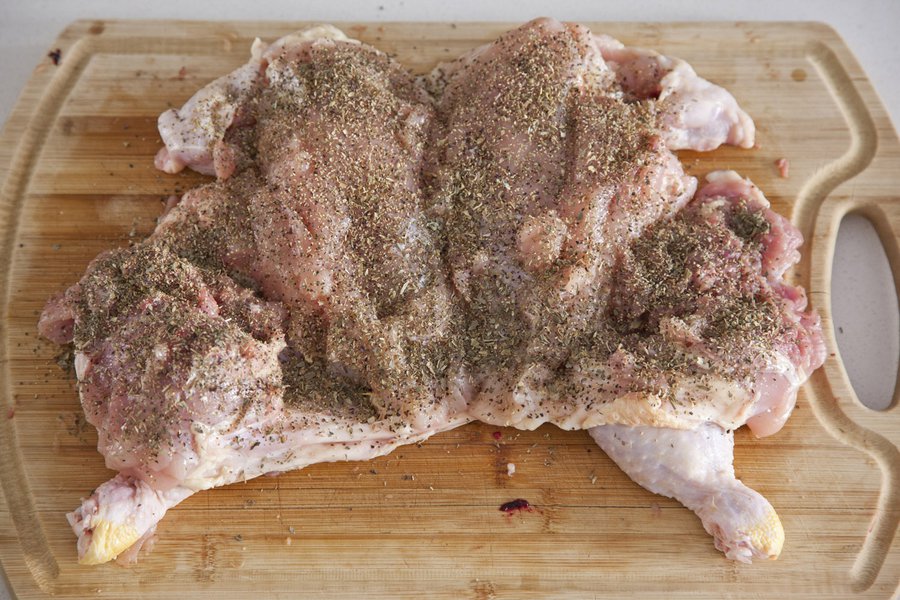 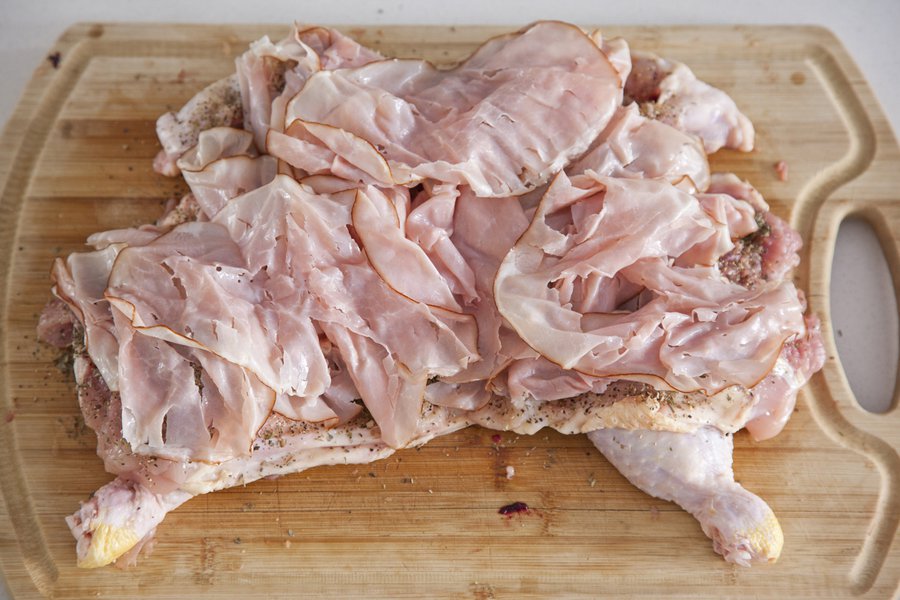 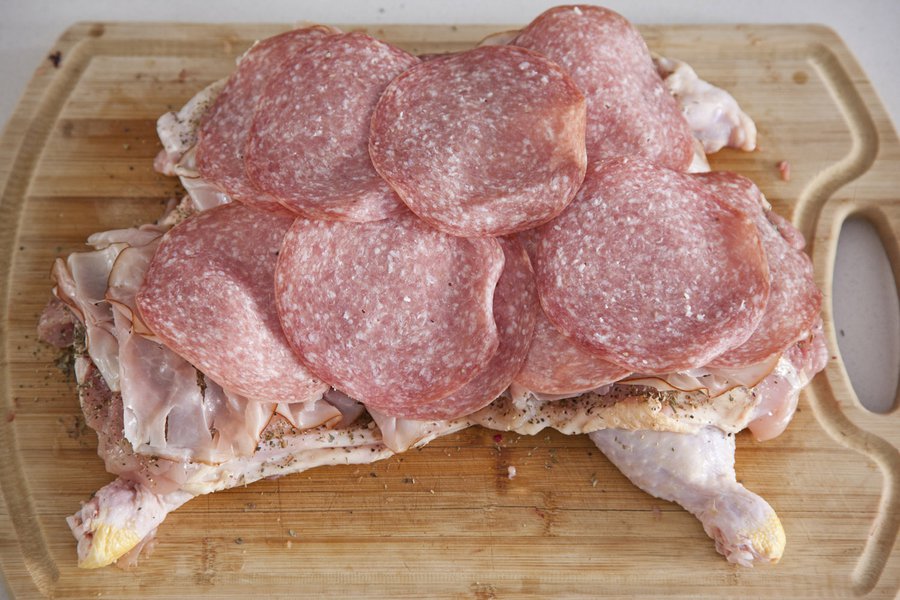 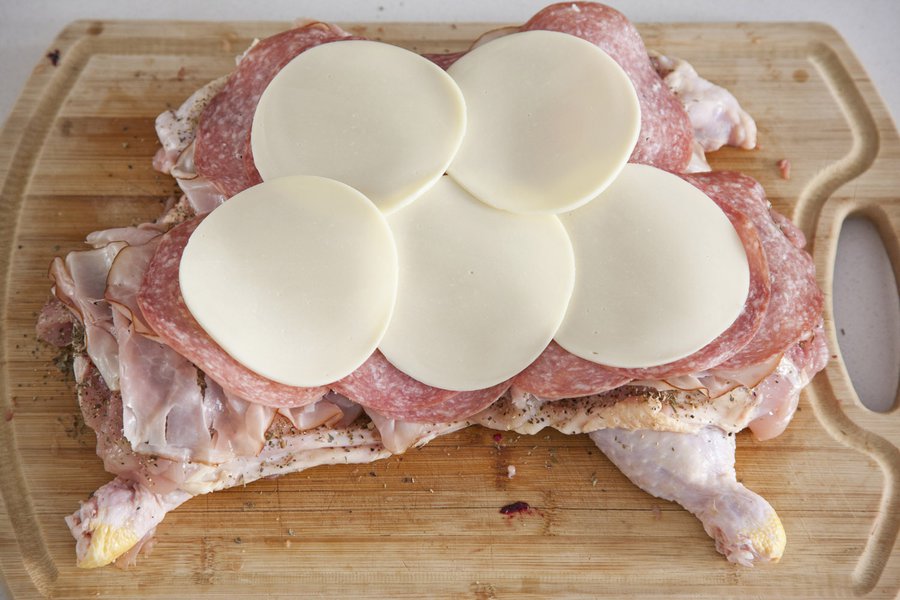 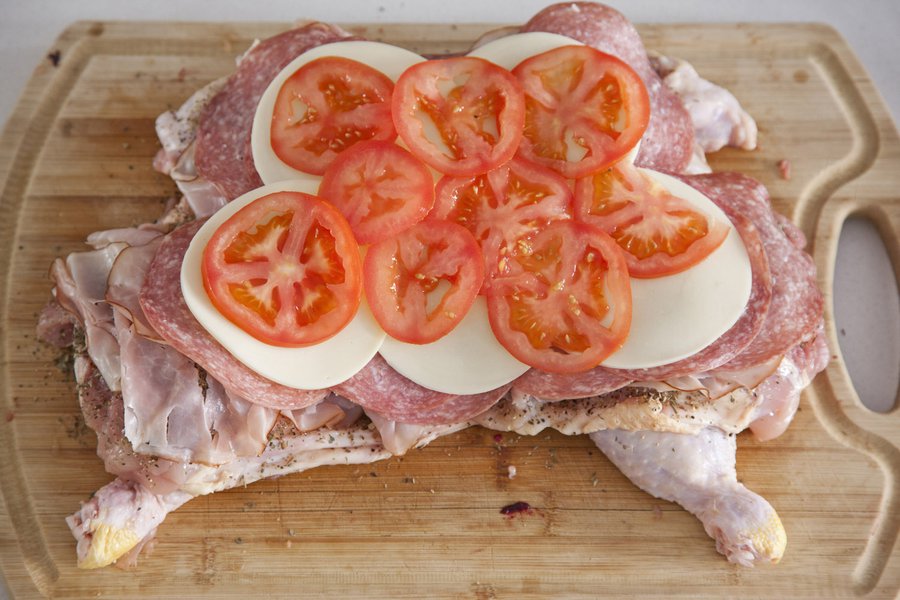 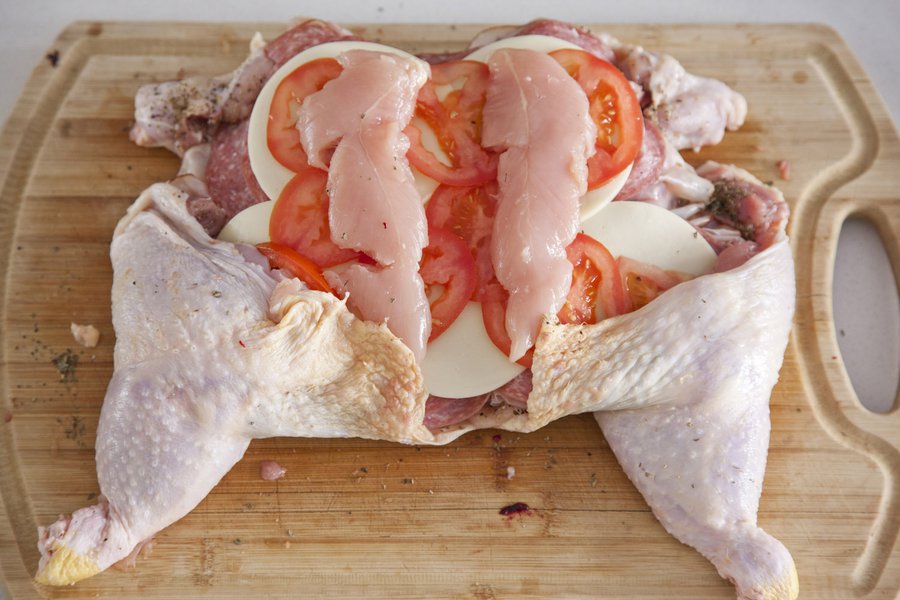 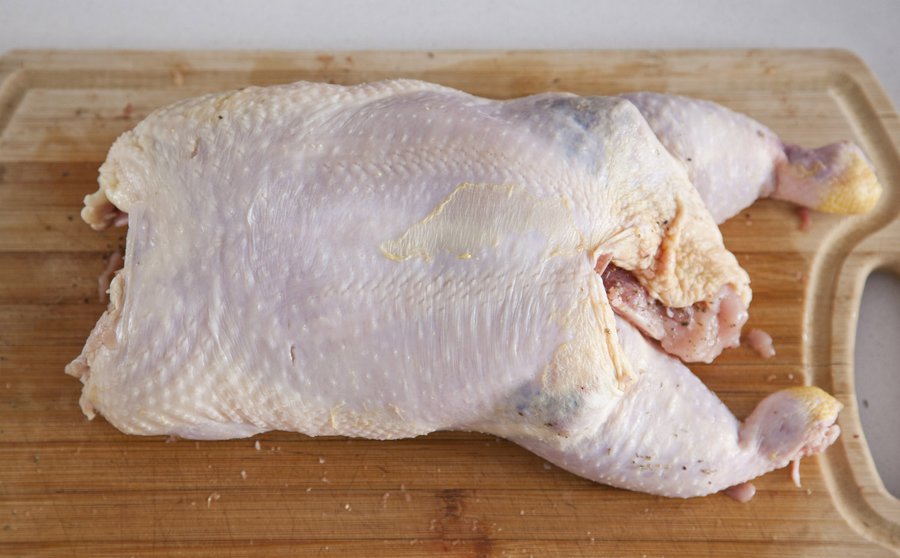 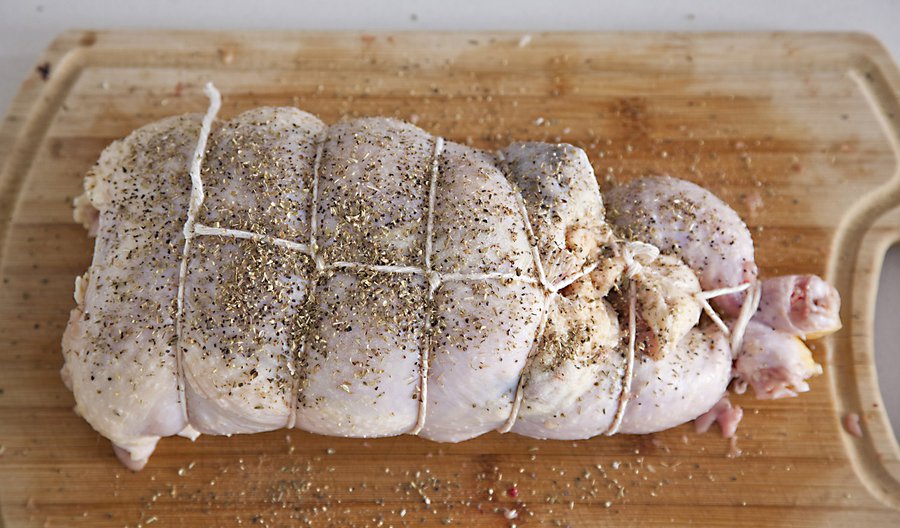 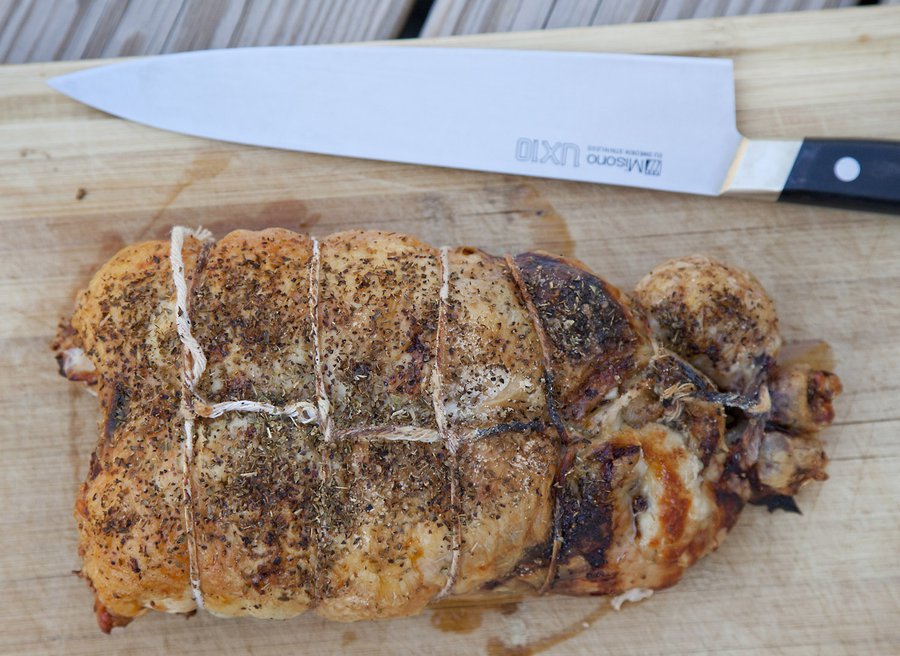 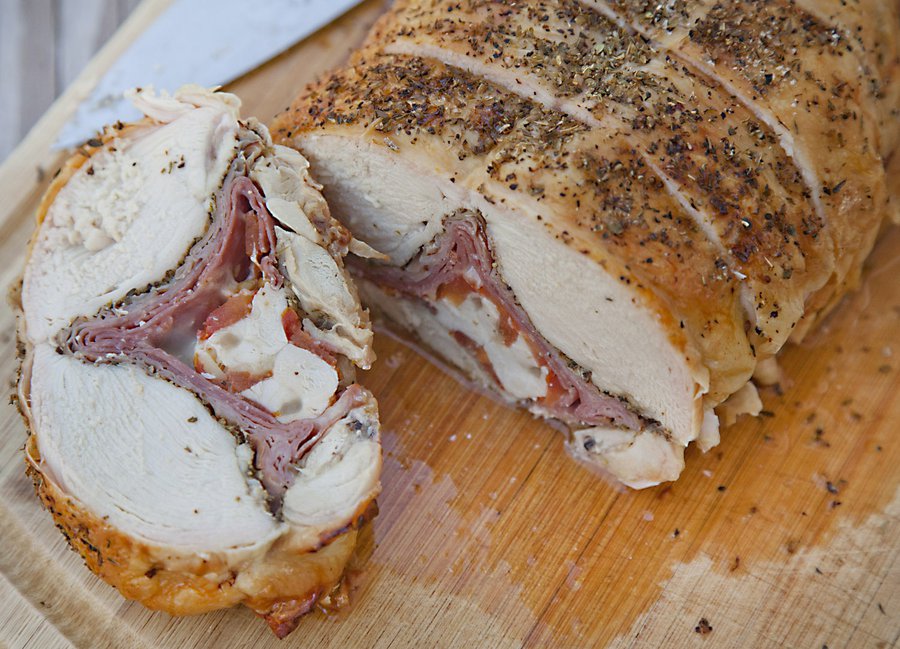